The Florida Economic Development Council (FEDC) honored the individuals and teams that are helping to drive Florida’s economy forward at its 2017 Annual Conference. The conference took place May 7-9 at the Hyatt Regency Pier 66 in Ft. Lauderdale.

Florida Governor Rick Scott was presented with the 2017 Business Ambassador Award for his strong defense of economic development and tourism programs and success in bringing hundreds of thousands of new jobs and billions of dollars in capital investment to the state.

The Eunice Sullivan Economic Development Professional of the Year award is given annually in recognition of the achievements of an outstanding economic developer within the state of Florida. The award was first given in 1985 and was renamed in 1991 to honor Eunice Sullivan for her dedication and commitment to the economic development profession and the Florida Economic Development Council.

Crystal Sircy, executive vice president of the Orlando Economic Partnership, has served the state of Florida in economic development leadership roles for more than 25 years. In her earlier role at Enterprise Florida, the statewide economic development organization, Ms. Sircy served as executive vice president and chief operating officer, where she managed five divisions, a $25 million annual budget, and led more than 90 employees across three offices.

“Crystal is the most accomplished state business development lead in Florida’s history,” said Cathy Chambers, 2016-2017 chair of the Florida Economic Development Council and senior vice president of strategy and business development at JAXUSA Partnership. “She is a tireless advocate for economic development issues and has testified many times in front of Florida House and Senate committees. Economic developers from around the state have relied on her to mentor them. Her contributions to our state are too numerous to count.” 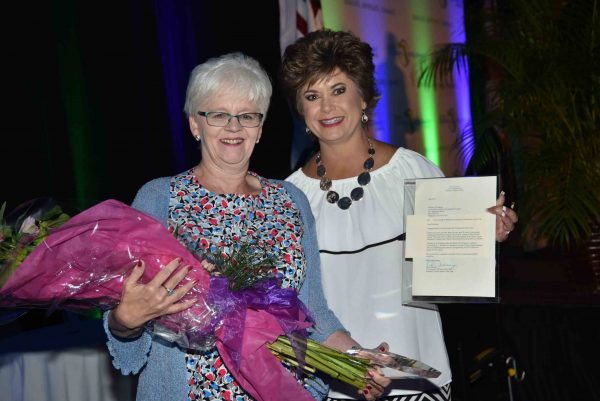 Given annually in recognition of the achievements of an outstanding workforce developer within the state of Florida, the Toni Jennings Workforce Professional of the Year award was first presented in 2007 to honor and recognize the former Lieutenant Governor’s exceptional leadership in revamping Florida’s workforce system to respond to critical workforce needs and to advance local, regional and state economic development.

This year’s recipient, Kathleen Woodring, is the executive vice president of CareerSource Citrus Levy Marion. Ms. Woodring has spent more than 25 years in workforce development roles in Pennsylvania and Florida. She has served citizens of Citrus, Levy, and Marion counties since 1997, directing workforce program implementation and programming for the three county area. She also leads the statewide planning effort for the annual Workforce Professional Development Summit for system-wide training of over 800 professionals each year.

“Ms. Woodring has set a new standard for excellence in managing relationships with community organizations and partners,” said Ed Peachey, president and chief executive officer of CareerSource Tampa Bay. “Thanks to her leadership, extraordinary attention to detail, and devotion to educating our professionals to be the most innovative and effective in the nation, she has helped create a path to prosperity for thousands of at-risk Citrus, Levy, and Marion County residents. Her impact on these communities will be felt for decades to come.”

The FEDC also honored Derek Shavor, project manager with Hillsborough County Economic Development, as its 2016-2017 Dan Webster Young Innovator Scholarship Award recipient. Given annually by The Corridor in recognition of the achievements of an outstanding young innovator in economic development in Florida, the Dan Webster Young Innovator Scholarship Award winner receives up to $5,000 to be applied towards coursework and fees associated with achieving the Certified Economic Developer (CEcD) designation.

Awards were also given to recognize exemplary achievements in innovation and marketing for economic development and innovative/best practices for our communities and abroad. The 2017 Economic Development Deal of the Year awards were presented as well.

For over 50 years, the FEDC has been developing the brightest economic development professionals and equipping them with sound policy and effective programs. The annual conference helps professionals to sharpen their skills and access the tools and resources they need to become outstanding economic leaders.

Get the Conference App

FIND WHAT YOU’RE LOOKING FOR